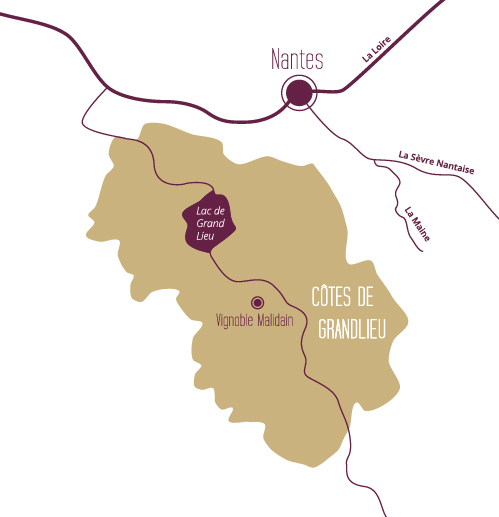 The area, which has just over 300 hectares of vineyards, stretches from the south-west of Nantes to the edge of Grandlieu Lake, encompassing 19 municipalities in Loire-Atlantique and Vendée. This proximity to the lake’s 9,000 hectares of water provides the appellation with a micro climate that encourages earliness in the Melon grape variety.

The sand and pebble soils formed from underlying metamorphic rocks, like gneiss and mica schist, enable the production of fresh and elegant dry wines.

Lees-ageing, which is used in most cases, enhances the freshness, fruitiness and complexity of the wines.

The production of Côtes de Grandlieu Muscadet is limited to selected plots and to adult vines of over seven years of age, inevitably leading to higher quality wines.

The Lac de Grandlieu is a lake located in Loire-Atlantique to the south-west of Nantes, approximately 10 kilometres south of the river Loire. Nearly all of the lake lies within the municipality of Saint-Philbert-de-Grand-Lieu.

In winter, it becomes the largest natural lowland lake in France.

The lake’s plant and animal life are remarkable and, as a result, a large part of it (2,694.6 hectares) is classified as a national nature reserve, while the westerly end (655.79 hectares) has regional nature reserve status. Some 270 species of birds, 19 species of reptiles and amphibians, 30 species of fish and 50 or so mammals inhabit the site. The environment is particularly well suited to the European eel. There are also 250 varieties of plants and 220 types of algae growing in and around the lake. Eight of these plants are internationally protected. Most of the lake is covered by water plants. In 1995, it was classified as a Wetland of International Importance by the Ramsar Convention.

While very large in size, Grandlieu Lake is extremely shallow (1.6 metres deep on average in summer and around 4 metres deep in winter), which explains its special ecological characteristics. It occupies a very shallow basin with a very shallow gradient at its edges, and as a result the lake’s contours are constantly changing. The lake can double in size during the year, going from approximately 35 square kilometres to 65 square kilometres in winter.

About 25 square kilometres of it, mostly to the eastern side, are formed from a core of livelier waters. The rest is composed of floating forests or ‘levis’, marshes, and flood meadows which are inundated with water in certain seasons.

The area of open water is at its maximum (about 2,200 hectares) in winter when the water plants disappear. This area has increased by nearly 13 hectares over the last ten years, reducing the area of reed-beds accordingly. A few commercial fishermen are licensed to fish in this open water. At the lake’s centre, the open water is scattered with floating pondweed.

A few strides from the lake, the Maison du Lac de Grand-Lieu, in Bouaye, enables visitors to learn all about the lake and its rich biological diversity.

It offers guided visits and an exhibition on the diverse landscapes and rich natural heritage and history of Grandlieu Lake, in a fun visitor experience featuring multimedia exhibits. From here, a footpath leads to the former hunting lodge of the perfume maker Guerlain and its belvedere offering fantastic and poetic views across the lake. In summer, the outing is even more perfect as you can sample local food and wine pairings (with AOP Muscadet Côtes de Grandlieu) on the terrace of this beautiful house.

The information collected on this form is stored in a computerised file by Vignoble Malidain for processing purposes and in order to be able to reply to anyone wishing to communicate with Vignoble Malidain.

Information is stored for three years and is for the sole use of Vignoble Malidain.

In accordance with the French data privacy act (Loi Informatiques et Libertés), you may exercise your right to access and modify your personal data by contacting Mineral via its contact form.

Find out more or adjust your settings.

This website uses cookies so that we can provide you with the best user experience possible. Cookie information is stored in your browser and performs functions such as recognising you when you return to our website and helping our team to understand which sections of the website you find most interesting and useful.

Strictly Necessary Cookie should be enabled at all times so that we can save your preferences for cookie settings.

If you disable this cookie, we will not be able to save your preferences. This means that every time you visit this website you will need to enable or disable cookies again.

This website uses Google Analytics to collect anonymous information such as the number of visitors to the site, and the most popular pages.

Please enable Strictly Necessary Cookies first so that we can save your preferences!